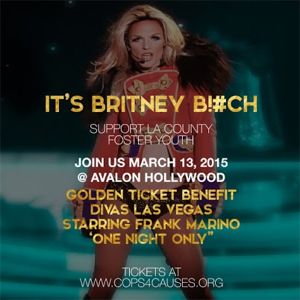 “Christine Devine is a tireless advocate for foster youth.  Her work with “Wednesday’s Child” which highlights children in need of loving foster homes is truly commendable.  Christine also is a huge supporter of the art’s and theater here in Los Angeles. We cannot think of a better choice to host our Inaugural Benefit for our Golden Ticket Program and Cops 4 Causes is honored to be joined by this remarkable woman, leader and humanitarian ” stated Cops 4 Causes President, Deputy Christopher Landavazo.

The Pasadena Playhouse is hosting a pre-kick off hosted VIP reception for Cops 4 Causes’ Golden Ticket Program on Thursday, February 26th at 7 P.M. that includes tickets to the award-winning show, “The Whipping Man.”

Tax-deductible tickets for the Golden Ticket Benefit featuring Diva’s Las Vegas ($25 – $400) are available Wednesday, Feb. 18th and tickets for A Night at The Pasadena Playhouse ($50) are on-sale now at www.Cops4Causes.org.

About Christine Devine: Christine Devine is a veteran television news anchor/reporter at KTTV in Los Angeles. She co-anchors the FOX 11 News at 10 pm Monday through Friday evenings.  Christine is also the host of Wednesday’s Child. The Wednesday’s Child adoption segment has aired on FOX 11 since 1995, helping more than 700 children from foster care find forever families. Christine’s passion is empowering young people to believe in themselves and find their unique gift within. Christine authored an autobiography “Finding a Forever Family, A News Anchor’s Notebook.” She also has written articles for Fostering Families magazine. She is the recipient of 16 Emmys, including the prestigious Governors Award, from the Academy of Television Arts and Sciences.

About Frank Marino: Known as the “Queen of the Strip,” Frank Marino sizzles in Divas at the LINQ Hotel in Las Vegas. The 75-minute show features an all-star cast of superstar female impersonators who recreate celebrities like Britney Spears, Cher, Diana Ross and Beyoncé. As the show’s star and emcee (Joan Rivers) Marino changes costumes between every act bringing an international whirlwind of couture to the stage with each spectacular entrance. Marino is also an accomplished author, news commentator, columnist and spokesperson. His book “His Majesty, the Queen” was first published in 1997. He also appeared in the movie “Miss Congeniality 2: Armed & Fabulous.” FrankMarino.com