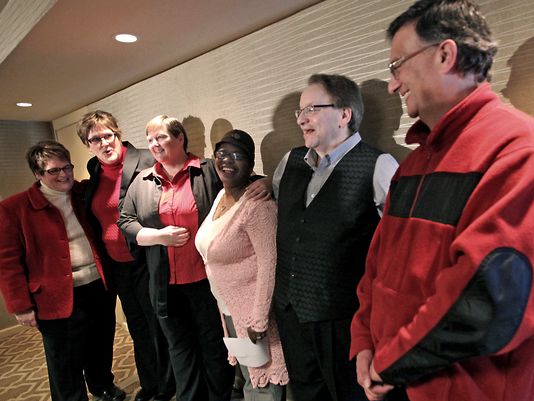 Plaintiffs in a federal lawsuit challenging Wisconsin’s ban on gay marriage appear during a press conference at the Madison Concourse Hotel in Madison, Wis. in November, 2013.
(Photo: Pool photo, AP)

Today U.S. District Judge Barbara Crabb ruled against Wisconsin’s constitutional amendment banning marriage equality, making Wisconsin the twelfth state to see such a ban struck down in federal court since the U.S. Supreme Court handed down its historic marriage rulings last June.  In Wolf v. Walker, the American Civil Liberties Union, ACLU of Wisconsin and the law firm of Mayer Brown LLP sued the state on behalf of four couples seeking to marry, arguing that the Wisconsin’s ban on marriage equality violates the couples’ due process and equal protection rights under the 14th Amendment to the U.S. Constitution.  Recently Wisconsin Governor Scott Walker began distancing himself from the state’s marriage ban, saying he didn’t know if it violated the U.S. Constitution or if voters in his state would approve it today.  However, state attorney general J.B. Van Hollen filed a motion in court earlier this month asking the judge to stay her decision if she rules in favor of the plaintiffs.

“Where you live should never limit your ability to marry the person you love,” said Human Rights Campaign (HRC) president Chad Griffin.  “All across the country, from coast to coast and everywhere in between, judges are striking marriage discrimination from the books using the U.S. Constitution as their guide.  Because of the couples who brought this case, their attorneys with the ACLU and Mayer Brown LLP, and the hundreds of plaintiffs challenging marriage bans across the country, we as a nation are closer than ever before to full equality under the law.”

A May 2014 Marquette University Law School poll showed 55 percent of registered Wisconsin voters favor allowing same-sex couples to legally marry. Today’s ruling in Wisconsin coincides with the release of new poll results by the Washington Post and ABC News which show that 50 percent of Americans believe that gay and lesbian couples have a constitutional right to marry guaranteed by the U.S. Constitution’s Equal Protection clause. Additionally, 56 percent of Americans and 77 percent of those under the age of thirty support marriage rights for same-sex couples.  Today’s results are the latest in an ever-expanding trend showing Americans moving inexorably in the direction of supporting equality for same-sex couples.

There are at least 70 court cases challenging discriminatory marriage bans across the country in 30 states and Puerto Rico.  So far five federal appeals courts are presiding over 10 marriage equality cases over the coming weeks and months. The Sixth Circuit holds the distinction of being the only federal appeals court to date that will consider marriage cases from all states within its jurisdiction.  Since the U.S. Supreme Court’s historic marriage rulings last year, no state marriage ban has survived a court challenge.

Same-sex couples can legally marry in nineteen states and the District of Columbia, while 31 states have a law or constitutional amendment restricting marriage to the union of one man and one woman.