HomeNewsLGBTQ in solidarity with March For Our Lives

LGBTQ in solidarity with March For Our Lives

LGBTQ in solidarity with March For Our Lives

As protesters took to the streets against gun violence last Saturday for the March For Our Lives in Washington, DC, the LGBTQ community marched along with them.

Our most prominent representative, of course, was Emma González, who is one of the young student leaders from Marjorie Stoneman Douglas High School, and the president of her school’s Gay-Straight Alliance (GSA).

While González identifies as bisexual, another of the student leaders from the school who identifies as lesbian is Sarah Chadwick.

Representing at the March For Our Lives

However, other LGBTQ groups also marshaled their presence on that day.

Around a hundred activists from the New York City-based group Gays Against Guns (GAG) set up in Pershing Park complete with a rainbow banner and pink Mylar strips.

As the protesters marched past the group, they saw either group members in drag urging the NRA to “sashay away” or dressed in white and veils and carrying photos of shooting victims to remind people of the loss.

Colorful spray-painted signs like “Not in my school,” “Stop trans murder,” and “Skinhead lesbian” (which had been thrown by an NRA supporter against González) were also prominently displayed.

“We have always been on the defensive as a community. So it’s a natural fit. We have been fighting for our rights for decades, likely eons,” said Cathy Marino-Thomas, a GAG organizer.

“I think that we are a community less afraid to stand up because, in many ways, we have less to lose and everything to gain,” she told Yahoo.

The LGBTQ March For Our Lives

The current push by the anti-gun movement has the support of the LGBTQ community, especially in light of the Pulse shooting also in Florida in 2016.

That’s why the Human Rights Campaign (HRC), led by Queer Eye co-host and a graduate of Parkland’s Marjory Douglas Stoneman High School, Karamo Brown, were also at the march.

Meanwhile, González told Yahoo Lifestyle that her sexuality and her drive to lead the movement is intertwined: “They’re definitely linked for me personally. If I wasn’t so open about who I was, I never would’ve been able to do this.”

She also cites transgender activist Sylvia Rivera of the 1969 Stonewall uprising, which is widely known as the start of the gay-rights movement, as her inspiration.

Noting the hate that Rivera also got from the community because she was trans, González said “that there will always be people that hate you, and that they’re always going to be wrong. So it’s good to use that, and remember that whatever you’re doing, if it’s making people that mad, then it’s probably a good thing.”

Speaking out at the March For Our Lives

Other groups who participated in the protest were survivors and family of the victims of the 2016 mass shooting at the Pulse nightclub in Orlando, Florida.

This group marched as part of the continent organized by the HRC.

Joining the march, Chad Griffin, HRC president, said in a statement: “Today we’re proud to be led by Pulse survivors and family members and join the hundreds of thousands of students and their supporters from across the nation in the March For Our Lives.”

“As the tragedy at Pulse showed us, hate can turn deadly when coupled with unfettered access to military-style weapons. The safety of LGBTQ people and other marginalized communities that face disproportionate levels of hate and violence requires the adoption of common-sense gun safety measures,” he added.

Also present at the march were: Christine Leinonen, mother of Drew Leinonen; Brandon Wolf, friend of Drew and Drew’s boyfriend Juan Guerrero (who were both killed at Pulse); José Arraigada; Ricardo Negron; and Earl Crittenden.

Meanwhile, Ana Navarro, a Republican commentator and Trump critic who was at the event, said: “I have no doubt that the constant curtailing of LGBTQ rights by the Trump ‘misadministration’ has everything to do with keeping his base happy and distracting us from the fact that he cheats, he lies and has no moral compass.” 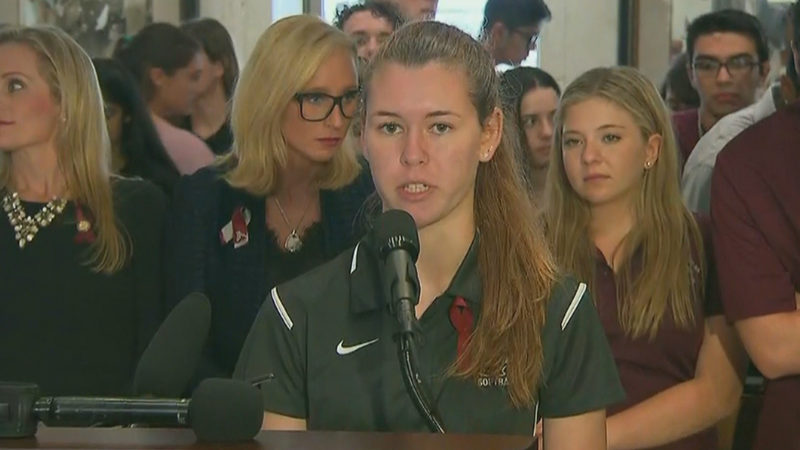