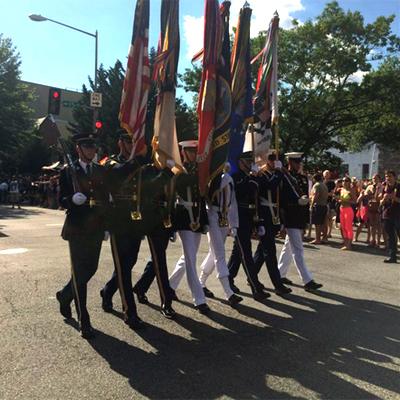 After over four decades of pride parades, 150,000 spectators at the Capital Pride parade witnessed something never before seen – a US Armed Forces color guard marching alongside rainbow flags and following Dykes on Bikes. It’s a first for the 39th annual Capital Pride parade on Saturday or any other pride parade in the US with a new contingent – a US Armed Forces color guard that presents the red, white and blue as well as flags of each branch of the military.

The eight-member color guard team from the US Army Military District of Washington led the parade through Dupont Circle and 17th Street and ending at 14th Street and S Street.

‘The Department of Defense has authorized what military gay rights groups and organizers of the Capital Pride parade say is a first nationwide,’ reports The Washington Post.

A statement on Capital Pride’s website reads: ‘We are very proud that for the first time ever in our country, the Department of Defense will participate in a Pride Parade. We will have an Armed Forces Color Guard present and retire the colors at the 2014 Capital Pride Parade. This is significant step forward for the community as a whole and particularly for those LGBT members of the armed forces.’

According to the Post, although all military installations throughout the US have their own color guards, they have reportedly rejected all previous requests to appear in LGBT pride parades citing scheduling conflicts. The report also noted that there isn’t any official policy against their participation in pride events since the end of ‘don’t ask, don’t tell’ in 2011.