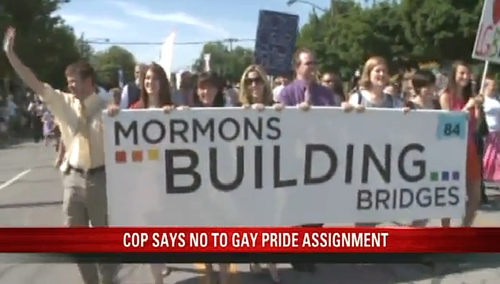 An officer with the Salt Lake City Police Department has been put on paid administrative leave after reportedly refusing an assignment at this weekend’s gay pride parade, KSL News
reports:

“We don’t tolerate bias and bigotry in the department, and assignments are assignments,” said department spokeswoman Lara Jones.

The officer is on paid administrative leave as the internal affairs unit reviews the situation, Jones said. He had been given a traffic control and public safety assignment.

The department has provided services at the Utah Pride Festival since its inception, as well as a host of other community events.

“We serve a variety of community events with similar functions, and to allow personal opinion to enter into whether an officer will take a post is not something that can be tolerated in a police department,” Jones said.

“Clearly the officer’s act was more than just smelling of bigotry, but I think the act was bigotry, choosing to not do a duty that is sworn by police officers to do,”