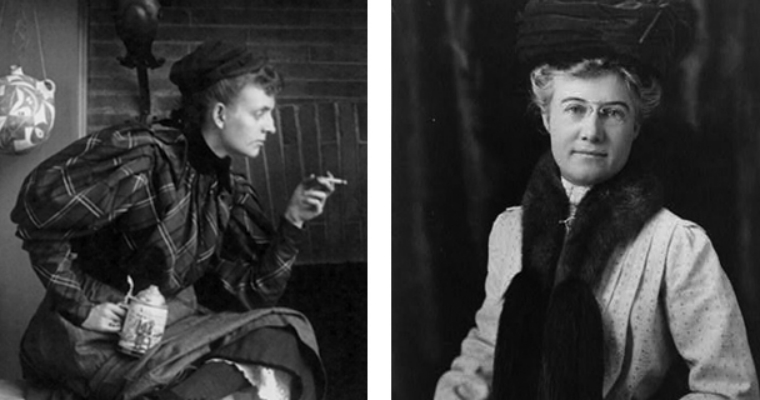 Letters were always one way for lesbians to let each other know about their true feelings for one another, from the 19th century to World War 2. Among those whose love letters have survived through time were between two women, Fannie Benjamin Johnston and Mattie Edwards Hewitt.

Both women were renowned for their photography during the 19th century, and were regarded as pioneering female photographers and photojournalists.

Likewise, both were involved in a relationship that lasted eight years.

Johnston came from a well-to-do West Virginia family. She was born in 1864, raised in Washington, DC, and studied at the Académie Julian in Paris.

Johnston received her first camera from George Eastman, the founder of Eastman Kodak, and she soon began to take portraits of family and friends.

As she began to make a reputation for herself, she moved on to her era’s celebrities and personalities like Mark Twain, Susan B. Anthony, and Alice Roosevelt.

Meanwhile, Hewitt was born in 1869 and came from a middle-class Missouri background. She later married a St. Louis photographer, Arthur Hewitt.

She was first her husband’s assistant in processing and printing the photos. But this before she first met Johnston in 1901 when Hewitt attended the Pan American Exposition in Buffalo, New York.

Johnston and Hewitt developed both a professional and personal relationship as they wrote letters to each other, and Johnston sent Hewitt film to develop.

Because of Johnston’s inspiration, Hewitt moved out from the dark room and behind the camera. In 1909, she also divorced her husband and moved with Johnston to New York City.

In 1913, they opened a joint studio that specialized in architectural photography. The photos they came up with had the credit “Miss Johnston and Mrs. Hewitt” or “Frances Benjamin Johnston and Mattie Edwards Hewitt.”

Their letters were similar to the missives sent by Virginia Woolf and Vita Sackville-West to each other, or Eleanor Roosevelt and Lorena Hickok, or even Edna St. Vincent Millay and Edith Wynn Matthison.

Admittedly, between the two, it was Hewitt who mostly wrote to Johnston.

In her letters, she declared: “…I am not foolish enough to expect you to love me in this way only it was so sweet and meant so very much that I could not but tell it over and over.”

Likewise, she told Johnston: “I have been so afraid from the first that you would think me a foolish sentimental woman and I was so happy when you told me the other day that you understood– If I have been proud of you and your work and put you on a pedestal, as you say, please let me keep you there, for you deserve it surely and that is my way of loving.”

“I wonder why I expect you to understand me better than most people– is it because I love you so?” Hewitt wrote.

Sadly, the two broke up in 1917 and both went on their separate ways, both personal and with their careers. Johnston died in New Orleans in 1952 while Hewitt died in Boston in 1956.

How to have a happy family with tw...